Linda Hudson Campaign for Mayor in 2012

City of Fort Pierce to FPUA: Increase the Revenue 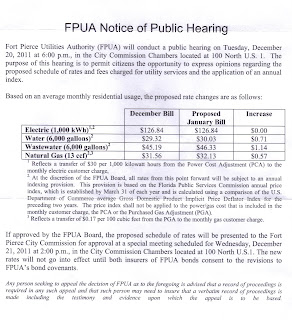 On December 21, the City of Fort Pierce Commission, in a special meeting (not televised and without public comment) voted to approve resolutions that would increase water, waste water and gas rates, increase the transfer from the FPUA to the City, allow the utility to use the Public Services Commission index to set future rates, and most importantly, prevent future rate decreases. The Commission renewed its quest for more revenue from the utility last summer when city commissioners, acting with information provided by city finance staff, directed the utility to move all or a portion of its Power Cost Adjustment (a month-to-month additional charge based on fluctuating fuel costs and a pass-through cost from the utility to the Florida Municipal Power Agency, FMPA). After a series of meetings, the FPUA agreed, with the caveat that even though there might not be immediate increases in electric rates, the utility would be unable to reduce rates, as it had planned to do in April of 2012. Bottom line: the city will get an additional $1.5 million to spend each year that will come directly from the ratepayers. The city is facing budget shortfalls in 2013 and 2014. At the December 19 city commission meeting, on the consent agenda, the commission voted to give each employee a $100 Christmas bonus (total of $35,100), and voted for a $15,000 reimbursement to Main Street for the money spent on the Christmas Parade on December 4, 2011.
Posted by Linda Hudson For Mayor at 2:39 PM No comments:

Westbury on Naughty and Nice

It's that time again, when we cast a jaundiced eye back over the year and nominate the public figures who've behaved badly. Yes, it's time for The Naughties of 2011.

The Nices will run on Christmas Day. Enjoy.

The champ this year, with a small multitude of people behaving badly, has to be The Wedding.

In late May, Clerk to the Circuit Court Joe Smith married former assistant county attorney Heather Lueke. The couple decided to have their reception at the Fenn Center in Fort Pierce.

The Fenn Center was built in 2008 as a special-needs shelter. Someone at the county had the bright idea of boosting revenues by going into the wedding business. Worse, that person decided to "award" a lavish reception to the Smiths for PR purposes. Bad move, very bad PR.

The Smiths paid a much-discounted rate for the room. What made it worse was a whistle-blower's account of expensive additional fixtures and items that were bought with taxpayer money to gussy up the place. Smith claims he was unaware they were getting a very special deal and that somewhere around $20,000 in public money had been spent on his nuptials.

The idea of making the Fenn Center pay for itself wasn't a bad one; what was dumb was giving the freebies away to a relatively well-paid public official.

Parks and Recreation Director Debra Brisson fell on her sword over The Wedding and there could be more casualties to come. Rarely have so many intelligent people acted without thinking.

Redrawing municipal election districts is a process that occurs every 10 years to take into account population changes and to prevent "gerrymandering," or tailoring district boundaries so they benefit only one candidate.

Leave it up to Port St. Lucie to do the job by gerrymandering a sitting councilwoman out of her own seat. A committee redrew the lines that put Michelle Berger's home in a different district from the one she represents. If it had stood, that would have meant that Berger couldn't run for re-election in 2012.

White Knight Jack Kelly rode to the rescue and drew up a little map of his own. Cartographic honors to Kelly and a rap on the knuckles for the committee.

The city of Fort Pierce weighs in at No. 4 for intransigence in supplying a citizen with details of recent city pension payouts. The citizen, mayoral candidate Linda Hudson, asked the same thing from the county and PSL and received answers from them in very short order.

It took Fort Pierce several weeks, they said, because of staff shortages and vacations. This is a repeat performance from the city on requests like this. Seems those big windows at City Hall still don't let in much sunshine.

A couple of court cases this year show D-list celebrities and sports stars better watch out if they're being naughty in St. Lucie County.

First, former teen heartthrob David Cassidy was pulled over on the Turnpike in late 2010 for close encounters with wine, pain pills and a bottle of expensive bourbon. He was sentenced to probation for driving under the influence in February this year.

Then there was Molly Hatchet guitarist Dave Hlubek, who got into trouble for allegedly driving after drinking at a Fort Pierce arcade. He got off because no one actually saw him drink and drive.

Slugger Miguel Cabrera may be hoping for the same verdict.

He was arrested Feb. 16 when a St. Lucie County sheriff's deputy spotted the ballplayer's vehicle on Okeechobee Road, with smoke coming from under the hood. Cabrera was calmly drinking from a bottle of Scotch at the scene.

His trial is expected to take place in January. An exasperated County Judge Cliff Barnes was moved to say, "This case can't go on for a year. It's a DUI case, not a murder."

Cabrera's defense is expected to be that he wasn't actually driving when he consumed the booze.

After a mention in The Naughties a few years back, Port St. Lucie Assistant City Manager Greg Oravec and I didn't talk for a long time. While Oravec has been on good behavior this year, there was a lapse at the St. Lucie County Chamber of Commerce Adult Spelling Bee in October.

I noticed the chamber didn't include these incriminating shots on its website. As a champion of the people's rights, we submitted a public records request for them. Tongue in cheek, Oravec replied that the documents should be exempt from Sunshine Law requirements because they were part of an economic development effort to recruit a panty manufacturer to the city.

"And," Oravec wrote, "as you can see from the size of the panties, they would have employed a large number of our citizens."

Thanks, Greg, for getting into the spirit of the Naughties. Glad to have you back. Anthony Westbury is a columnist for Scripps Treasure Coast Newspapers. This column reflects his opinion. For more on St. Lucie County topics, follow his blog at TCPalm.com/westbury. Contact him at 772-409-1320 or anthony.westbury@scripps.com.
http://www.tcpalm.com/news/2011/dec/19/anthony-westbury-watch-out-were-making-those/
Posted by Linda Hudson For Mayor at 8:15 AM No comments:

Want to contribute? Want to Help?