Linda Hudson Campaign for Mayor in 2012 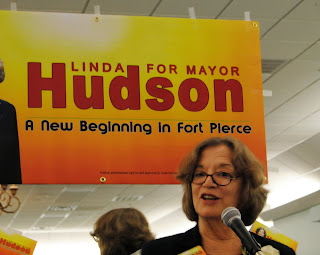 November 9, 2011... It was a great crowd of family and friends. I was humbled and proud that such a fun group of supporters and well-wishers came to the launch party and stayed to meet new friends and get reacquainted with old friends.
Here is the text of my presentation there:

Thank you all for being here tonight.

About five years ago, I began attending the city budget meetings. Since then, I’ve attended many budget workshops, requested public records, studied the budgets, asked questions of commissioners and urged action for and against many ideas and schemes. One constant theme of mine was to stop spending and stop the red ink of debt.

For the past two years, I served on the citizen’s budget advisory committee. Our recommendations challenged the thinking of elected and staff leaders. It brought to the forefront in a formal way how citizens think tax dollars should be spent in Fort Pierce.

A New Beginning in Ft. Pierce: What does a new beginning mean?

The City should spend money wisely and carefully.

The city has a budget of slightly over $30 million and debt at $95 million. In 2013, the city must pay $5 million for debt…money for past spending on property and a parking garage. Over-spending has caught up with our city. There must be serious spending reductions for every non-essential city function. Personnel costs make up the major part of city spending; pension and health insurance costs alone total $5 million.

City government should place service to its citizens above all else.

City Hall exists to serve the citizen; the citizens don’t exist to feed the spending habits of city hall. Residents are not “revenue streams,” but we are human beings who want to live or work in Ft. Pierce and prosper here. If we prosper, then the city expands its revenue.

We need a city government that lives within its means; operates in the black and not the red; puts the private sector ahead of the public sector; and puts the taxpayer ahead of everyone.

I plan not to take a salary or benefits. I will not take a car allowance, or even two car allowances. My family and friends will not be hired to be city government workers.

The city should spend tax dollars on what is essential to serve the public.

Public safety should be our number one priority: Our streets and neighborhoods should be safe. A safe city improves the business climate and the lives of our residents.

Our utilities should be efficient and affordable. We must find a way to lower utility rates so that businesses and residents can afford them.

City hall practices should improve the business climate to keep and attract businesses and bring jobs to the community.

No more wild, costly schemes that benefit a few, instead of benefitting the many, like the South Bridge reconfiguration

No more edicts that don’t make sense, like moving the Farmers’ Market permanently

If I’m elected, I will not lose sight of those who elected me.

Thank you for being here tonight. This event is as much about you as it is me. To those who have contributed, I say thank you too. To those who have offered to help in my campaign, I am very grateful for your time. If you have questions or concerns about anything, please don’t hesitate to email or call me.

I will do my best to provide open, honest public service.

Linda Hudson, Candidate for Mayor of Fort Pierce in 2012

Posted by Linda Hudson For Mayor at 3:45 PM

Want to contribute? Want to Help?